Do you want to make your child’s dreams come true and send them on an unforgettable holiday to the best football academy in the world ? Would you like your child to play football on the fabled pitches of La Masia that developed the talents of players like Sergio Busquets, Andres Iniesta, Xavi and Lionel Messi ? The Barca Academy Soccer Camp offers an unbelievable footballing experience paired with beautiful visits to Barcelona’s loveliest sights that merge together to form the holiday of a lifetime.

The football camp will usually takes place in the Ciutat Esportiva Joan Gamper (but it depends on the club availability, it’s not 100% sure), which is Barcelona’s training ground and academy base in Sant Joan Despí.

Barcelona is a beautiful town that is bursting with tourist activities and provides an excellent setting for family holidays. From the impressive Sagrada Familia to La Rambla, Barcelona’s main street, to the Barri Gotic, the Gothic neighbourhood with relics of Roman buildings, there is always something to do in the capital of the Catalan region.

With temperatures of around thirty degrees centigrade, it is ideal for both soccer training and tourist activities. Training in heat helps build physical abilities faster and it is not too hot to go outside during the day.

The top teams in the world need the best facilities in order to maximise their development and improve as much as possible. Barcelona is no exception, and the facilities are of exceptional quality.

Childs usually practice at St. Joan Despi’s facility but it depends on the club availability.

There are five grass pitches at the Ciutat Esportiva as well as four artificial grass pitches where the daily training sessions throughout the week take place. The grass fields are very well maintained and the astro pitches are perfect for football all year long, being a more consistent surface than grass

A separate area is made available for goalkeeper work and precise technical drills. There is also a grandstand by one pitch for family to watch the sessions if they want. Finally, a multi sport arena is also onsite for any indoor training.

However, what is indescribable about these fields is the feeling that any young soccer fan should experience when they walk onto them. Playing soccer on the exact same fields that a player like Lionel Messi has played on as well should be enough to make any player awe-inspired.

All meals of the day are included in the price of the camp. The food offered will be Mediterranean so players will have a balanced and nutritious diet based around ingredients such as olive oil, fresh fruits and vegetables, protein-rich legumes, fish and whole grains.

A healthy diet is exactly what young players need in order to develop their muscles and recover from exercise properly, and the camp promises to deliver that.

There will be chaperones supervising the participants of the camp at all times. These are qualified staff from Barcelona that have all taken an official police background check and they speak English and Spanish.

The residences have cameras operating 24/7 as well as security guards and there are special keys that only the staff have in order to access the accommodation.

If you are wanting to visit your child, you will need to make sure that the chaperone is fully aware of this. 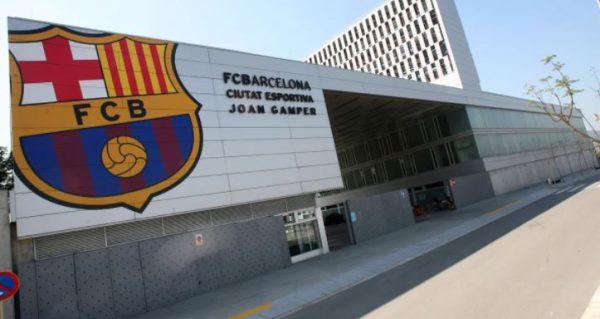 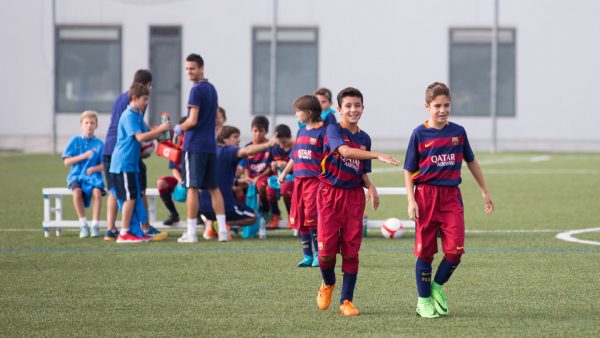 The camp will have two daily training sessions a day during the week and there are visits planned on the weekends. There will also be methodology and system class room sessions.

The training sessions will be conducted by some of the best coaches in the world and will attempt to teach the players how to play the Barca way. This will include work in reduced spaces, exercises on how to retain possession while still posing an attacking threat and tips on how to improve decision making.

Barcelona’s football is usually calm and calculated and the coaches will try to infuse this serenity into the players, whether it be through advice during the training sessions or explanations during the methodology sessions. There should be one coach for every twelve outfield players and one goalkeeping coach for every five keepers, so your child will be individually monitored to maximise their progress.

The coaches will also use the methodology sessions to make sure that the lessons that they are teaching are understood and being implemented by the players. It is really a chance to open up their eyes to an entirely different way of looking at soccer and a different way of playing football.

The players will participate in one beach session. This is very useful for developing agility and strength as running in sand is so much harder than grass. On top of that, it is also extremely fun and if they want, the players can also take a dip in the beautiful Mediterranean Sea.

Specific goalkeeping training is offered if at least five goalkeepers sign up to the camp. These are conducted by official Barça Academy goalkeeper coaches, and keepers can expect invaluable tips and techniques to help them improve.

A typical weekday will start with a wake-up at around 7:30 AM before breakfast and a training session in the morning. Before lunch, the coaches will usually recap everything they were trying to teach during the session.

There will be some free time over the lunch break, and then back to either football training or methodology sessions in the afternoon.

Next is some free time or some group activities, before dinner and finally bed at around 10 PM.

The weekends will generally follow the same schedule except by replacing the football sessions with cultural visits and fun activities like Port Aventura and beach football.

Another activity offered is the tour of the Camp Nou. Your child will be able to wander through the changing rooms to see where the professionals get ready, replicate their footsteps on the official walkway to the pitch and drink in the full glory of the 100,000+ capacity stadium.

The guided tour finishes in the Barcelona gift store but before that, players will be given entry to the trophy room, where twenty seven La Liga trophies and five European Cup trophies silently sit.

That’s not it. There are also cultural visits planned across Barcelona, a city rich in history and culture. The Sagrada Familia is an incredible structure that has not yet been finished despite construction starting in 1882!

Gaudi, the architect responsible, has a lot of influence over the landscape of the city, and the participants will be shown other examples of his work during the historic district guided tour. A Parc Guël guided tour is also usually offered as long as it is available, and of course, the visit to Port Aventura, which all the rollercoaster fans will be dying to go to.

Players should arrive on Saturday morning between 7 AM and 12 AM if they are flying to Barcelona. There will be shuttles transporting participants from the airport between 8 AM to 1 PM.

Players can arrive at different times but there will be no shuttle to take them to the camp, so they will have to arrange their own transport.

Departures from the camp must be on Saturday morning no later than 9 a.m.

Parents are not always allowed to the training sessions, it depends on the club’s availability.

The Barcelona Summer Soccer Experience is the opportunity for boys and girls aged 11 to 16 to practice at the high quality facilities of the Barca Academy and be coached by specialists with the Barcelona winning mentality.

Barcelona are one of the best teams in the world that try and win in the right way. They play stylish football that relies heavily on possession, precise passing, movement and ease on the ball and the team almost always includes a couple of the Academy’s graduates.

One such graduate is the world’s most talented player Lionel Messi. The small Argentinian was scouted by Barcelona when he was playing for Newell Old Boys in his home country, and the Spanish club flew him to Spain, offered him a place at their academy and even provided growth hormones that he needed.

His natural skill allowed him to rise through the ranks of the club and he was training with the senior team by the time he was sixteen. Obviously Messi’s naturally has so much talent, more than any other football player ever, but Barcelona was the perfect club for him to develop and improve.

A club of Barcelona’s quality does not just teach Lionel Messi, it also learns from him. Recognising his talent, Messi’s strengths and skills are constantly being analysed by Barcelona’s coaching team who hope to pass it on, and the Argentine’s influence on Barcelona as a club has been massive, including the coaching methods and the Academy.

However, Messi is not a one off example of Barcelona’s academy producing world class players. In 2010, Messi won the Ballon d’Or, the award for the best individual footballer of the year. Andres Iniesta and Xavi, the two centre midfielders from that same team, came second and third respectively, the first time ever that the best three players in the world came from the same academy.

The current Barcelona mentality of winning games by playing effective but stylish football was properly implemented when the legend Johan Cruyff took over as Barcelona’s manager. He came to the club when performances, attendance and results were all awful, but within a few years he had transformed the whole club into winners.

Both the first team and the youth teams started playing a Cruyff brand of football, and he handpicked players that he believed would be the best in this system, like Pep Guardiola, Michael Laudrup and Ronald Koeman. All players in the team were confident with the ball, Koeman sometimes pushing out from centre back to break the lines.

What made Cruyff so effective as well is that since the youth teams were also playing very good football, the team was almost self-sustaining. Couple that with nifty transfers and it is clear that Cruyff had lain the foundations for not just a world class team, but also a world class club.

The desire to produce beautiful soccer and players who can make this has continued to this day, and is clear in the coaching techniques. Technical drills are extremely common in Barcelona training sessions, and defenders are expected to be as good on the ball as the rest of the players.

Cruyff instilled this demanding culture that has continued to push the club to improve, and no part of the club reflects this as much as the Academy.

However, this camp is not just about football. Your child can also visit cultural landmarks like the Sagrada Familia or go to the exhilarating theme park Port Aventura. On top of this, families are encouraged to come: there are loads of things to do in the beautiful city in Barcelona and the training sessions are open for families to spectate. Participants can very much come on their own as well of course!

This camp is also trying to teach the participants what HEART is: Humility, Effort, Ambition, Respect and Teamwork. These five principles are intrinsic to Barcelona Football Club and anyone who represents these values will do well at the camp. 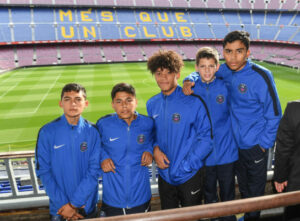