The Féderération Française de Football (French Football Federation) has arrived in New York for one reason: to bring the best parts of French football development to the States. The FFF is in charge of everything to do with football in France. It manages and organises the French national teams as well as amateur French football. Having won the World Cup in 1998 and 2018, France as a footballing nation has taken it to the next level and its youth development is recognised worldwide.

The shining symbol of French excellence is the INF Clairefontaine centre, which has hosted superstar names like Kylian Mbappé and Nicolas Anelka. All French coaches spend time at the INF Clairefontaine centre where they learn the excellent methodology for training young players. The World Cup victory with a very young squad was the high point and culmination of French youth development.

For a long time, Brazil was the country that produced the most professional players. However, since the 2000s, France has taken over this title. There are French players at all the biggest clubs: Real Madrid, Manchester United, Juventus, Bayern Munich and many more. FFF has decided to bring its development methodology to the USA and New York, by creating the French Football Academy (FFF Academy New York).

The development methodology and the FFF Academy New York’s training programs were devised by Jean-Claude Lafargue, who used to the INF Clairefontaine’s director. He is now the FFF Academy technical director and organises footballs camps in the FFF way. Zohair Ghenania, his right hand man, manages the academy. He used to be FC Lorient’s coach and holds the BEPF coaching diploma.

The FFF Academy Manhattan camps take place on Randall’s Island, a magnificent island to the east of Manhattan. Your kids will train on synthetic pitches with FFF trained coaches. They will help your kids improve and prepare for university. 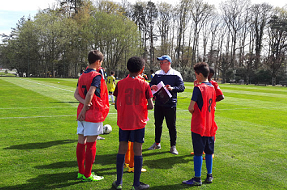 Manhattan is New York’s most famous and reputable borough. Central Park, located right in the centre, is Manhattan’s heart and lung. People go to picnic, play sport or just for a stroll. All of New York’s biggest sights and monuments are also in Manhattan, such as the Empire State Building and Times Square. New York’s most famous borough is one of the most cosmopolitan places on Earth, with modern neighbourhoods and effervescence 24 hours a day (after all, New York is the city that never sleeps).

Go to the north of Manhattan and behind the Harlem River, you will spot the FFF Academy New York’s football pitches. Cross the Robert F. Kennedy Bridge and you are on Randall Island. The island is entirely dedicated to sport, particularly football with many artificial turf pitches. The FFF Academy New York pitches can be found in the south of Randall Island, with a fantastic view of New York and Mill Rock.

Your kids will spend a week on Randall’s Island for an authentic FFF football camp. The island, located on the East River, is one big sport complex. There are 60 pitches on the island, which make up half of Manhattan’s total football, softball, American football, lacrosse, field hockey and rugby. There are some natural grass pitches as well as artificial pitches, which means that people can play and train regardless of the weather. The pitches are also floodlit, allowing for evening training sessions.

The FFF Academy trains on the pitches located in the south of the island (pitch 84). The FFF camps take place on 11-a-side artificial pitches, which of course also mean that you can play 7-a-side too. 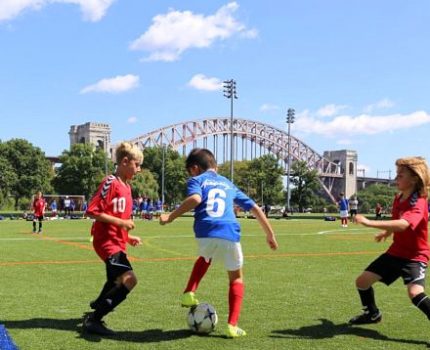 Kids need to bring lunch with them for FFF Academy camps. There will be a one hour lunch break every day so that the campers can eat.

There will be bottles of water available, but it would be better for each camper to bring their own water bottles, which we can of course fill up onsite. There will only be FFF Academy staff and campers on the pitches and the staff will take care of your children from the moment you drop them off to the moment you pick them up. The campers will therefore be under the supervision of professionals with experience in taking care of kids.

Jean-Claude Lafargue, who used to be the director of the Institut National du Football en France (the National Institute of Football in France), is now the FFF Academy technical director. He has designed and implemented training programs from the FFF Academy for these camps, based on how the French national team youngsters train at Clairefontaine.

This means the campers will be following the same training program as young professionals training at the INF Clairefontaine. The aim of the camps is to increase each player’s potential and take them from playing at an amateur level to a professional level and prepare them for university.

It is not just football however: human values are also given a lot of importance at FFF Academy camps. Shared by the coaches, values and morals will be at the heart of every training session and each camper must respect them: enjoyment, respect, tolerance, solidarity and commitment. It is very important for the kids to develop and progress on the pitch, but it is just as important for them to be good people off the pitch. Everyone will need to buy in to and respect the FFF values. 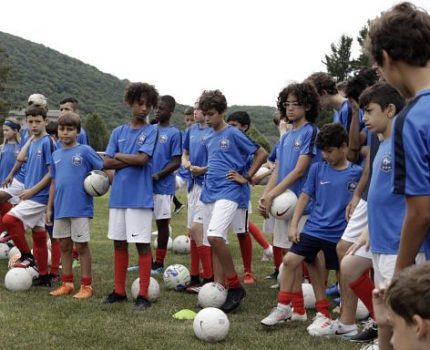 This methodology is used at Clairefontaine, which has produced some of the world’s best ever football players, like Mbappe, Henry or Matuidi.

The kids must be in their training kit, with their football boots and shin pads on. The Nike FFF Academy kit will be given to each camper when they arrive on the first day.

A bus can pick up your child in Manhattan and drop them off at the pitch. 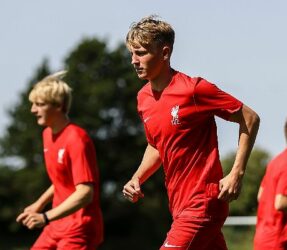 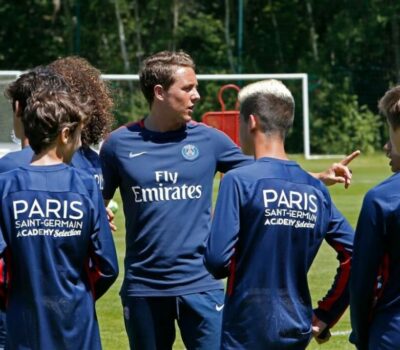 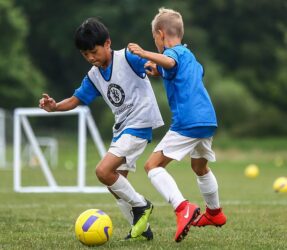