Would you like your child to have the time of their life all the while meeting people from all over the world and seriously improving their soccer? New York Red Bull Soccer camps can offer this thanks to their fantastic facilities, their perfected program and their hand-picked coaches that are specialised in youth development with high level qualifications. Why not take this chance to give your child the holiday of a lifetime?

Georgian Court University is spread over 156 acres in Lakewood New Jersey and is midway between Philadelphia and New York City, as well as being close to both Six Flags and the Jersey Shore

There is a state of the art Wellness Centre that is fully equipped for physical fitness, athletic excellence, and environmental awareness.

More relevant to soccer, there are full sized fields, of both the natural grass and artificial turf kind as well as a gymnasium for indoor play.

Two options are possible for this soccer camp : residential and day camp. For residential, meals are included.

This residential soccer camp is perfect for boys and girls of all levels who want to progress technically, physically, mentally and tactically. The facilities to which each player will have access are of a high standard. It will also be an opportunity for the children to discover one of the biggest cities in the world: New York!

Trainings are undertaken by the expert coaches and have been developed meticulously. They will include drills intended to train one particular skill such as ball control, shooting, passing or dribbling and will be taught so that the campers know why they are doing the drill and what they can do to improve in future. In the afternoon, there shall be a second training session. While the morning one will focus more on technical ability, the afternoon one will focus on tactics. Players will learn about positioning, the role they should be playing for their team depending on the formation, how to use tactics to win soccer games and much more. This can transform a good player into a great player quicker than technical training, because a player who truly understands this side of the game does not even need to be particularly technically gifted. Strikers especially can be poor soccer players, but thanks to their understanding and reading of the game, they have a knack to find themselves in the right place at the right time, and that is enough.

After the second session, the campers will have an hour to either rest or participate in non-soccer activities. This could include going to the beach or the swimming pool, tennis or even basketball, and are a great way to build team harmony and make sure that the kids don’t get burned out.

The New York Red Bull soccer camp is a unique opportunity for players to get advanced and specialised coaching, and to be pushed mentally, physically, technically and tactically further than they have been before.

There are not many camps that offer this in the United States, and New York Red Bull is hoping to develop players from a young age, something that is common across Europe but not yet the case in the US. This is actually part of the reason that American players perform less well on the international stage and in European leagues. 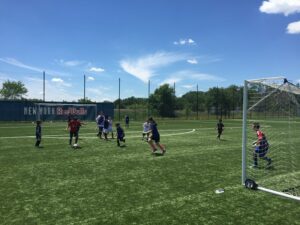