Would you like your child to spend an incredible soccer filled week influenced by one of Canada’s very best club’s philosophy? Do you want them to participate in advanced training sessions in order to improve their soccer in a technical, tactical and physical way as well as meeting other players from all over the globe? If so, the Montreal Impact soccer camps are the ideal choice for you!

The camp takes place at the Saputo complex which is the complex located right next to the Impact Montreal soccer stadium.. Temperatures in the summer in Montreal are generally around 22 degrees centigrade, which is ideal for playing soccer. It is warm enough to makes injuries less likely and still cool enough that they are unlikely to suffer from dehydration or excessive heat.

Montreal is a vibrant city, and it is filled with beautiful attractions and fun activities. Mount Royal, from which the city gets its name, is 692 acre city park which offers an incredible combination of nature and and the city through lovely views and pathways. Street fairs are very common in Montreal and are a fantastic way to get a feel for the culture and have a chance to buy local products and produce.

As well as this, you can wander through Old Montreal to experience its European roots and to explore the city’s finest restaurants and historic landmarks. Finally, the Underground City is an unmissable attraction. It is over thirty kilometres of underground passageways from restaurants to shops to anywhere else, and it is heated in the winter and air conditioned in the summer.

On October 1, 2013, the Montreal Impact inaugurated its new synthetic field located right next to the main field at Saputo Stadium. It is notably used by the other teams of the Academy and the club’s soccer schools, as well as by the local community.

Designed by FieldTurf, this field is the first in Québec to be equipped with the Revolution technology, which includes a more durable fibre. The field has also been certified FIFA 2 Star, the highest grade possible for a synthetic surface.

The synthetic surface also meets the growing demand for quality. 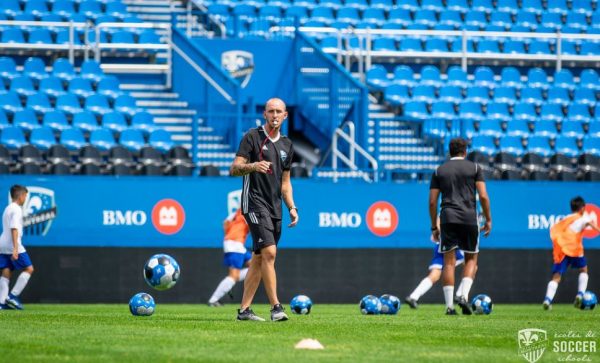 The Montreal Impact Soccer School day camps is perfect for boys and girls who wish to have a week of intensive soccer with professional coaching. It is open to players and goalkeepers.

The schedule at the Montreal Impact soccer camp has been specifically designed to make learning soccer and improving the campers’ level as easy as possible. It has been carefully created with the club’s mentality and if the players work hard and seriously, then they will leave the camp with fantastic memories, new friends and as better soccer players. After a presentation of what they will do during the day, the first training session of the day will take place. These will usually be focused on one or two specific skills or areas of soccer. For example, if it is a more technical session, then a skill like passing, shooting or dribbling will be practised through drills and games and then the skills will be put into use in more match-like situations. On the afternoon, the campers will have their second training session of the day. As well as encouraging technical progression, the coaches will be trying to improve the players’ tactical understanding of the game. To do so, they will be teaching them about positioning, what role they need to play within their team and what it really takes to win a soccer match.

To ensure that everything goes well, trainees will be asked to arrive between 8.30am and 9am each morning in order to have time to get dressed for a 9.30am start of training.

Afternoon training ends at 3pm and parents are invited to pick up their children directly afterwards.

Address: 10555, Avenue de Bois-de-Boulogne, Montreal, Quebec, Canada, H4N 1L4 Closest airport: Montréal-Pierre Elliott Trudeau International Airport Closest train station: Montreal Central Station Gare centrale de Montréal A transfer from the airport can be organised thanks to a shuttle organised by the camp. This will come at an additional cost and takes under half an hour

The Montreal Impact Soccer Camp is available for players between the ages of nine and fifteen, both boys and girls as well as outfield players and goalkeepers. It was started in 2015 with the intention of giving the kids a week of 100% soccer, which is many young player’s dream.

There are two prerequisites for participants. The first is that the players must all have been players at a club for the past three years and secondly, that they can all juggle the ball fifteen times. This is to make sure that all the campers have a suitable soccer level, or it will not be beneficial for them and they will hold the group back.

The camp is directly imbued with Montreal Impact’s philosophy. The club was founded in 1992 and competes in the MLS, and in 2015, it became the first ever Canadian and only the second MLS club to qualify for the final of the  CONCACAF Champions League, the most prestigious club tournament in North America, Central America and the Caribbeans.

In 2019, they announced a new manager who is a legend in the footballing world. That man is Thierry Henry, a player who is often considered the best player in the history of the Premier League, which is in turn considered by most to be the best league in the world.

He was an unbelievable player who was capable of everything and anything, and he was an integral part of the Invincibles, the Arsenal team that did not lose a game for a whole season. He also played under some of the best managers in history, namely Arsene Wenger at his prime and Pep Guardiola at Barcelona.

He is a man who knows what success tastes and looks like, and will be raring to impose his vision at Montreal Impact, all throughout the club. He will already have added his considerable knowledge and principles to the philosophy of the club, and having such a man at the head of the club can only be a positive thing.

The camp will benefit from his influence, and the desire to win and improve is the minimum of what will be important at the camp. The camp will operate through learning and understanding the game of soccer as well as practising and training various skills and competences in order to globally improve the camper’s soccer level, and it is a tried and tested method! 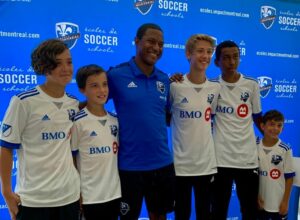